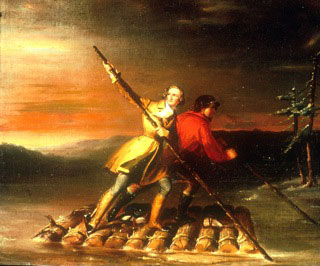 Part of a surveying crew for Thomas Lord Fairfax, 16-year-old George Washington first saw “ye fam’d warm springs,” on March 18, 1748. During the next decade, he visited the springs with his brother Lawrence, surveyed land in Great Cacapon, built forts and pursued Indians through the region.

Washington, now a major in the Virginia militia, is portrayed here with Christopher Gist, a noted wilderness guide and interpreter on their return from a trip to deliver a message from Virginia Governor Dinwiddie to the French along the Ohio frontier in 1753. 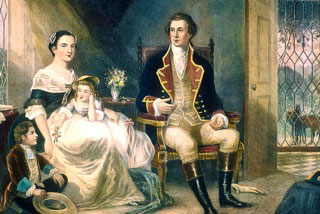 During the 1760s, George Washington lived the life of a Virginia planter at Mount Vernon. He visited the popular resort of Berkeley Springs (then known as Warm Springs or Frederick Springs) with his family during the “season” for weeks at a time. He hoped “taking the waters” would help Martha’s sickly daughter, Patsy. Much of Washington’s time at the springs was spent riding, dining and visiting with the Fairfaxes who called the settlement “our Bath.” 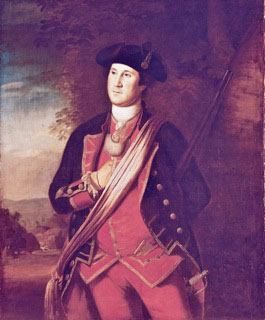 In September 1784, George Washington stopped in Berkeley Springs, now established as the town of Bath, on a trip to see his land in the Ohio Terrirtory. He stayed at the recently opened Throgmorton’s Inn. While there, he met James Rumsey, an inventor and partner in the Inn. Washington contracted with Rumsey to build a summer house overlooking the springs on two lots he had bought in the town’s original auction in 1777. Washington championed Rumsey’s efforts to develop a working steamboat and hired the inventor to build a canal for his Potomac Navigation Company. 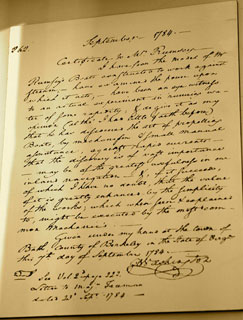 BACK TO BEGINNING OF WASHINGTON HERITAGE TRAIL INTERPRETIVE CENTER