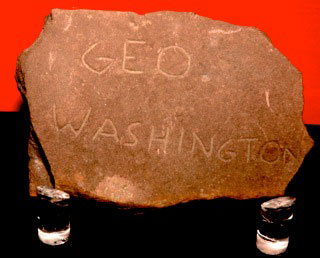 George Washington did sign his name as carved on this rock. He usually abbreviated his first name; sometimes G. or Geo. or even Go.

George Washington did survey in today’s Morgan County in the early 1750s although there are no deeds indicating Washington surveyed the lands in the Unger area where the rock was found.

The rock was found on the surface of land in woods near the entrance to Sleepy Creek Hunting and Fishing area off WV13 in Unger by Henry Canoles Jr. as he walked with Henry Sr. in May 1982. Sleepy Creek is a site on the Washington Heritage Trail.

The area in which the rock was found was crossed by the old Hampshire Grade Rd. which was in use during the 1750s. The Washington Heritage Trail follows this road as it crosses Sleepy Creek Mountain.

The sandstone rock is on permanent loan to the Museum of the Berkeley Springs from Roxanne Snyder of Highspire, PA. The display case was assembled by Dick Rohn; the stand built by Dave Milburn. The rock exhibit debuted on March 17, 2007.