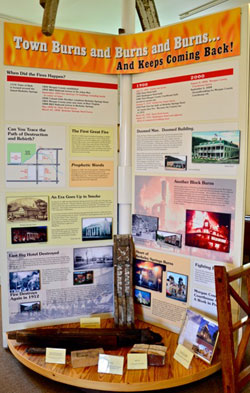 When Did the Fires Happen?

September 1844 — fire destroys 14 buildings including hotels in center of town.

Can You Trace the Path of Destruction and Rebirth?  Map of main fire locations.

The First Great Fire
The fire of 1844 cleared virtually all buildings on Wilkes Street, then the main street. These included the first courthouse, several boarding houses, a general store with an 18th century dance hall upstairs and the kitchen of O’Ferrall’s Coffee Shop (later known as the Fairfax Inn). Many of the buildings were in decay. The rebirth came almost immediately. A new courthouse was built, as was the first Methodist Church, both on the lots where their successors are today.

Prophetic Words
On June 13, 1890, The News reported: “BS Hotel has not been destroyed by fire as some of our exchanges say, but the St. Elmo Hotel known locally as the Fruit Hill property was. The loss is bad enough but not near so bad as the burning of our large hotel would be.” Eight years later, the worst happened.

An Era Goes Up in Smoke

On March 22, 1898, the faded Berkeley Springs Hotel at the south end of the park was totally destroyed by fire. Only the machine shop and outbuildings remained. The hotel was closed for the season and there was no threat to human life. Circumstances were suspicious. The locally owned hotel was about to be purchased and revived by Dr. C.W. Chancellor of Baltimore.

Many big projects were proposed over the years for the empty lot. The Park View Inn was finally built in 1932 by the local Harmison family. It remains the core section of today’s Country Inn.

Last Big Hotel Destroyed
The sprawling Fairfax Inn once dominated most of the Fairfax Street block facing the park under a variety of names, and built helter-skelter beginning in 1794. When the main section of the hotel on the east side of Warm Springs Run burned in 1901, the way was open to develop the block as a commercial strip but not until another fire cleared more lots.

The midday fire started in the kitchen/ ironing room. Everything went wrong in fighting the fire from a delay in calling for help to burst hoses and low water levels. Within two hours, all was in ashes. The town’s remaining hotel was destroyed. Only its small annex remained.

A night blaze in the winter of 1912 cleared the remaining structures on lower Fairfax Street, including the Fairfax Inn Annex and those that had been built after the Fairfax Inn fire a decade earlier. High winds drove flames down Wilkes Street, setting the Methodist Church tower afire and leaving cracked its famous Wanamaker bell. Philanthropist John Wanamaker was a guest at the Berkeley Springs Hotel in the summer of 1890 when the church was underway. He pledged to pay for the bell when the building was debt free. By October, the bell was up.  Owners lose heavily, said the paper after the fire.  Firemen fought nobly. The ashes were scarcely cool before the structures lining lower Fairfax today were built. IMAGE at RIGHT: Methodist Church tower

When the Palace Theater on east Fairfax Street had its back gutted by fire in 1925, its owner, Daniel Dunn got out alive. His wife was not so lucky. Rumor claims the fire started from an oil stove lit on stage to keep the snakes of a traveling theater company warm. Within a couple weeks the theater was back in business. A decade later, Dunn’s hotel across Fairfax Street was wrecked by fire. Nearly a half century later, the Opera House building where the Palace was located, was reduced to ruins by the Washington Hotel fire and eventually demolished.
Dunn Hotel

Built in 1903 to provide rooms after the catastrophic loss of both the Berkeley Springs Hotel and the Fairfax Inn, the Dunn Hotel fell victim to a local fire bug in March, 1935. The Dunn was one of seven fires investigated a month later. It was uninsured. The remaining structure was removed piecemeal over two years. Nothing was built on the lot until the current structure in 1960.

Twelve people died in 1974 when a smoldering basement fire in the Washington Hotel burst into flames at 3am. The hotel was destroyed along with the adjacent block of 19th century commercial buildings. Nine businesses were wiped out. Approximately 25 people were rescued including six trapped on a ledge. One small building was rebuilt almost immediately. Most of the remaining block has stayed vacant. Like the Dunn, the Washington Hotel was built to replace rooms lost in previous fires. Local businessman George Biser built it in 1905. Eventually, it was four stories with a tower and 120 guest rooms. As of 2011, this remains the most deadly structure fire in West Virginia.

Another long smoldering fire burst into early morning flames and destroyed the interior of Morgan County’s third Courthouse on August 8, 2006. This one started on the upper floors. Unlike the Washington Hotel fire, firefighters were able to save all the surrounding structures. Thanks to a people brigade of local citizens carrying out official records, none were lost. Two years later, ground was broken for a new $13 million courthouse on the same lot.

The local fire department, still volunteer today, improved after each major fire. Equipment, training, response time and supporting fire departments meant that fire fighters were better able to contain the destructiveness and extent of the fires.

ARTIFACTS:
1. Thousands of yellow bricks were saved from the Courthouse fire. They date to the 1908 construction

2. Wooden gate led to County Clerk’s office in the courthouse

3. An arch from over the front door of the Courthouse.